Cenotes in the Yucatán

In the depths of a limestone cavern, near a doorway to the Maya underworld, Filomeno Tomay took out a flashlight and held it up to the cave wall. “Es un caballo,” he said softly. (“This is a horse.”) Mr. Tomay, a stout 66-year-old Maya guide, stood deep inside Cenote Dzitnup, wielding a yellow beam for tourists to reveal a gestalt of conjured shapes on a wall of burled stone. Bats buzzed and hissed overhead. The air was hot and thick, tinged with sulfur. Through a corridor below came the sounds of splashing and low murmuring voices.

Cenote Dzitnup, an immense vaulted cavern in the middle of the Yucatán Peninsula, is a strange and otherworldly tourist trap, filled with deep, clear water, flanked with roots, vines and giant stalactites pointing down over an inky abyss. Buses stop there to unload beachgoers from Cancún. German tourists strip naked to put on Speedos before leaping in for a swim. Aboveground, girls work snack stands, and little boys beg to guard your car in the parking lot. But Cenote Dzitnup is worth the stop. Found just southwest of the town of Valladolid on the way to the Maya ruins at Chichén Itzá, it is an archetype of the unique karst (porous limestone) geology ubiquitous on the Yucatán Peninsula, where water-filled sinkholes called cenotes were literal wellsprings of a civilization.

Trim the jungle down to its roots, scrape away 10,000 years of sediment and mud, and the northern Yucatán is a billion-hole brick of porous stone, flat as a tortilla with hardly a lake in sight...

Cenotes in the Maya World - Archaeology.org

Yucatán's porous limestone bedrock doesn't lend itself to the formation of perennial surface water such as rivers or lakes, and the rain that does fall in the region quickly percolates deep into the limestone. Over time, the mildly acidic rainwater eats away at the peninsula's fractured limestone bedrock, creating underground caves. Eventually, the roofs of these caves collapse, exposing subterranean water sources ranging from small caverns that link into vast underwater cave networks to large, sun-filled basins that can begin a hundred feet below the surface...

On a sunny winter morning in a remote patch of scrub jungle in Yucatán State, I stood knee-deep in the mouth of Xibalba, the Maya underworld, tugging impatiently at my wetsuit and scanning the crystalline pool for signs of my guide, Guillermo "Memo" de Anda, who was somewhere below making a quick check of the conditions. I was also keeping an eye out for the crocodile that state ecology officials warned us about when they heard we were planning on diving the site for the first time. They thought it was only a four- or five-footer, but they couldn't be sure. De Anda surfaced in a rush of bubbles. "It's beautiful down there!" he blurted, yanking off his mask. "So clear, and the size of some of the pots! And the cave..." He shook his head, "It just goes and goes and goes. Wait until you see it!"...

The natural wonders of the state of Yucatan are innumerable and some of the most important and unusual are the cenotes (say-NOH-tays) or sink holes. In the Yucatan there are over 3000 cenotes, with only 1400 actually studied and registered.

The Maya called them dzonot (ZO-note), which the conquering Spaniards translated as cenote (say– NO–tay.) Giraldo Diaz Alpuche, was a military commander in the 16th Century who was greatly impressed with these underground caverns and pools, and he tried to explain the meaning of the word cenote in the Spanish language as meaning "deep thing". The Motul dictionary, a dictionary of Mayan hieroglyphics, defines dzonot as "abysmal and deep".

Cenotes are magical, enigmatic and unique in the world and were once the only resource for fresh, sweet water in the local Yucatecan jungle. They were the sacred places of the Maya for that reason, but also because they represented the entrance to the underworld... 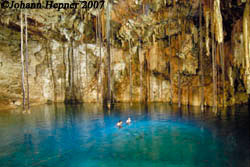 The Maya were able to survive droughts, and even flourish, because they used an unusual system of natural wells for their water supply. The northeastern Yucatan has approximately six thousand such wells, which gave the Maya access to an extensive system of underground rivers. The Spanish colonials named the sinkholes cenotes, from ts'onot or dzonot, the native words for the the natural wells...

Get refreshed in the stunning crystal waters of the Yucatan’s most enticing natural wonders: The Cenotes. A system of underground rivers connects over 30,000 of these natural sinkholes across the Yucatan peninsula. Visit hidden subterranean cenote caves, go cenote snorkelling, cenote diving (Scuba), or just take a swim in a bright, open freshwater cenote. We’ve spent over a year exploring the Yucatan cenotes – Below, we’ve chosen 24 of the best, stretching all across the state from Merida to Valladolid./p>

Cenote from the maya dzonoot: 'Hoyo con agua or hole with water.” These sinkholes are unique formations in the world and they are surface connections to subterranean fresh water bodies in the Yucatan plain. For the Mayans, the cenotes were sacred spaces where they would perform sacrifices and rituals. From ancestral times, the cenotes were of great importance for the Mayans and they were considered portals or windows into the underworld of the dead called Xibalba. Do not miss the opportunity to refresh yourself and feel renewed in these sacred waters of the Yucatan!

El Corchito, a hidden paradise in the Progreso mangroves

There’s something quite otherworldly about El Corchito, the ecological reserve just outside Progreso. For starters, it’s sort of hidden in plain sight and is completely inaccessible except by lancha (small boat). The light here particularly gets to me: everything has a green glow to it due to the way in which the sun works its way through the tall mangrove trees above. The Yucatan Peninsula is a flat, thick shelf of limestone with thousands of miles of underground, water-filled caves interconnected by rivers. When the roof of one of these caves collapses, it produces a sinkhole or natural well, filled with fresh water. The most famous cenote is the sacred cenote at Chichen Itza, but hundreds of cenotes large and small dot the Yucatan. Some cenotes are hidden deep in the jungle and others are inside larger caves. Some have been reliable sources of drinking water for centuries, which is why many Maya villages and ancient cities are located nearby.

During a recent visit to Hacienda Chichen, we learned of a small Maya pueblo called Yokdzonot, only a few minutes drive from Chichen Itza, where a group of citizens had formed an association that has spent two years converting their abandoned cenote into a project of sustainable tourism.